The Complete Guidebook for Manaslu Trek 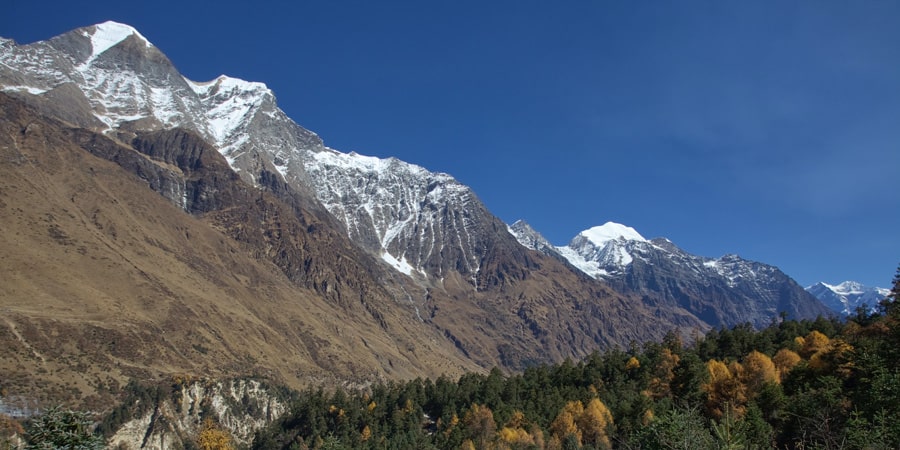 The Manaslu Trek opened in 1992, enriches your experiences with its captivating natural essence, exclusiveness, and untouched beauty. Gaining popularity recently as one of the best treks in Nepal, it takes you around the Manaslu Conservation Area and leads to a breathtaking view of the eighth highest mountain in the world.

The Manaslu Circuit Trek is a stunning 11- day to 24 – day journey which treks around Mount Manaslu, starting from Soti Khola to ending in Besisahar. You will travel 160 km from Kathmandu to reach SotiKhola for this trek.

This Trek features epic scenery, and takes you through a relatively off-the-beaten remote path to the beautiful landscapes, fierce white water river falls, and dense forests of Manaslu mountain (8,156m/26,758ft.

You will gain insight into local people and their ancient culture and a 5100m (17,000-ft.) Himalayan pass crossing.

This article unfolds each and everything in detail that the enthusiast trekkers need to know about trekking in Manaslu Nepal.

What are the Major Highlights of the Trek?

Where is Manaslu Trek Located?

The trek is located 64 km east of Annapurna in the Gorkha District of Nepal. It takes place in a sub-tropical Himalayan foothill to a dried Trans-Himalaya high meadow bordering Nepal and Tibet.

The real trek occurs in Manaslu region though it starts driving from Kathmandu on Prithvi Highway that follows the Trishuli River. When you reach Soti Khola via Arughat, your real trek in the Manaslu circuit begins.

On this trek, you will pass many places such as Sotikhola, Machhakhola, Jagat, Philim, Deng, Ghap, Lho, Samagaon, Samdo, Dharmasala, Bhimtang, Dharapani, Besisahar etc.  Beginning from Sotikhola to ending at Besisahar, this encircles Manaslu. Thus, it reckons as Manaslu circuit trek or Manaslu trek.

You cross Larkya La Pass (5,160m), the highest point of this trek Manaslu circuit. Views of the snowcapped peaks of the Manaslu region, the glory of Mt. Manaslu (8,156m), Ganesh Himal and the Langtang region are lifetime memories. This trek also leads you to have fascinating views of Shringi Himal (7,187m), Ganesh Himal (7,319m), and Himal Chuli (7,893m).

Manaslu Nepal Trek covers a huge trek distance. You will have various options to alter the itinerary based on your interests.

The Manaslu trek is an off-the-beaten-path trail in the Himalayas of Nepal. The route leads you up and around the incredible scenery of the base of Mount Manaslu. Located in the Manaslu region, you can encounter the unique blends of both Nepalese and Tibetan cultures.

This trekking region unfolds a spectacular landscape and diverse geography. Trail in this region with beautiful scenarios captivates all, and the site is surrounded by mesmerizing snow-capped mountains from all directions.

The circuit route in Manaslu Nepal takes around 14-24 days to complete which depends on your itinerary. Complete the trek in time, demands tough physical fitness.

Why Manaslu is called Killer Mountain?

Ans: Mt. Manaslu is called killer mountain because more than 60 people have lost their lives while attempting to summit during the Manaslu trek. Its treacherous slopes and proneness to avalanches are the major factors for the incident.
16 people died in the Fall of 1972 from a major avalanche and 11 died in 2012 also from an avalanche.

Is Manaslu difficult to climb?

Ans: Manaslu is a serious high-altitude mountain where more than 60 climbers have died. No mountains with a height above 8000 meters are considered as easy.

What is the meaning of Manaslu?

Ans: Manaslu means “mountain of the spirit” which is derived from the Sanskrit word manasa, meaning “intellect” or “soul”. you need to understand the true meaning of life and the superiority of nature objectively when climbing Manaslu during the Manaslu circuit trek in Nepal.

What is the height of Manaslu?

Ans: The height of Manaslu is 8,163 m from the sea level which is the eighth highest mountain in the world.

How long does it take to climb Manaslu?

Ans: It takes 6 weeks to climb including a trek up to the 4,400-meter Manaslu Base Camp. You will allot 23 days just for the climbing time.

How much does it cost to climb Manaslu?

Ans: Climbing Manaslu Mountain costs around USD 11,500 including all the service costs. The cost covers all the transportation, meals, services to Base Camp and High Camp, expedition equipment, and high-standard tents at the Manaslu Base Camp trek. You need to pay an extra USD 2500 for the climbing sherpa.
If you just looking for the Manaslu mountaineering royalty, it is US $1800 in Spring, US $900 in Autumn, and US $450 in Winter/Monsoon.

How many camps does Manaslu have?

Ans: There are four high camps above the base camp. You can summit Manaslu through the North-West ridge by placing the camps.

What is the easiest 8000m peak to climb?

Ans: Cho Oyu is the easiest of the fourteen 8,000m peaks which is the sixth highest mountain in the world. It is 219 km away in distance from the Manaslu circuit trek.

How many people climb Manaslu?

When was Manaslu first climbed?