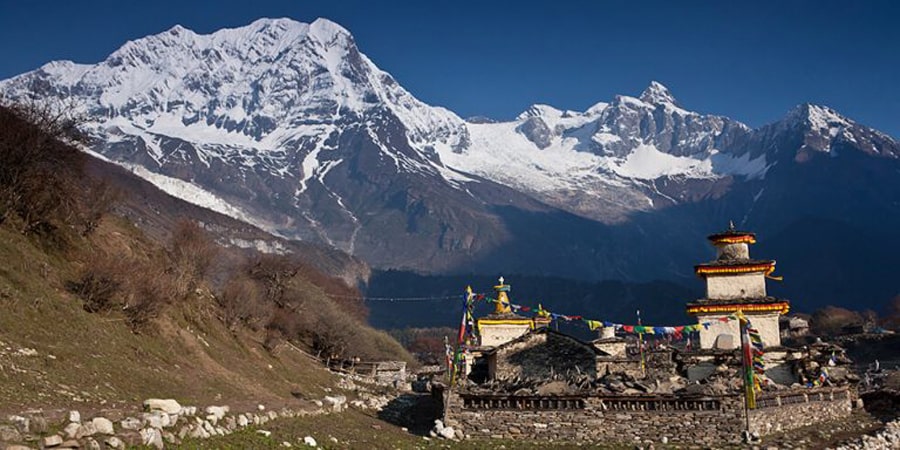 You can successfully hike the Manaslu Nepal circuit during all four seasons, but the best time to trek the Manaslu Base Camp is during Spring (March, April, May) and Autumn (September, October, November), respectively.

Each season is distinctively lovely so the choice is really up to you. However, you should remember that Larke Pass will be closed by snow during the winter. Due to such weather, you cannot go to the Manaslu Base Camp site and the Tibetan border at that time.

In January and February, the teahouse (lodge) in Dharmasala remains closed.

Spring and Autumn is the best time to trek Manaslu. The weather and temperature are worth around Manaslu circuit trekking. There are no chances of avalanches, landslides, or floods during this season.

Autumn is the peak season of this trek. This season is the best time to trek here.

Details of each Trekking Season:

The spring months of March, April, and May bring out the best of the rhododendron blooms, lush greenery, and magnificent mountain views.

The highlight of the spring trekking season for the Manaslu circuit Nepal site is the month of April. The temperature ranges from a cool 6oC (42.8°F) to a soothing 12oC (53.6°F). This golden weather persists till mid-May.

Even in the relatively secluded trails of the trek circuit, the spring season attracts aspiring mountaineers. They attempt nearby peaks and fellow trekkers enjoy the beautiful mountain trails.

April is also the plantation season in Nepal, which means you can get glimpses of the local lifestyles and rural practices during your trek.

Summer in Nepal is accompanied by the monsoon winds thereby making the months of June, July, and August the rainiest months of the year.

This is considered as wettest of the seasons.  The monsoon increases the possibility of snowfall in Manaslu trek altitudes over 4500m (14,764ft) and the occasional dazzling rainbow.

The rain brings with it its share of bugs, leeches, and the clearest skies in all the seasons allowing for great visibility. In addition, the monsoon season sees its share of natural disasters and blocked pathways due to floods and landslides.

Exercising extra caution is recommended as trails get wet and slippery. During such conditions, it becomes harder to trek in the Manaslu circuit. While the rainfall may be hindrances during your trek but with the right gear. You can turn these inconveniences into just another detail of your memorable adventure.

The summer season sees minimal traffic, so you can enjoy easy access to accommodation and experience nature undiluted. If you want to avoid the crowds of high season, the monsoon season is a great pick for your Manaslu base camp trek.

Fall is known to be the best trekking season in Nepal. The best season to complete your trek falls during September, October, and November, after the power-washing that the monsoon gives to the stunning circuit.

The best month for the Manaslu circuit trekking Nepal is October. In this month, temperatures range from a mild 15oC (59°F) to a chillier -2oC (28.4°F) in higher altitudes. It is also a festive month.

Even strong into November you’ll still be blessed with stunning clarity and awe-inspiring views. Moreover, the rivers, streams, and waterfalls are at their best, replenished by the summer rain.

Besides the trek, you can witness the Manaslu Trail Race in this region held in November.

Due to fall being the best time to trek the Manaslu circuit site, it is also the most crowded time. The only inconvenience you may face would be in making accommodations and arrangements. Such a problem is easily remedied by pre-booking with us and personalizing the perfect adventure for you.

With some determination and a specifically curated Manaslu trek packing list, you can enjoy this winter wonderland to your heart’s content.

Winters are tranquil times as upper Manaslu locals pack up for warmer residences. Most visitors are reluctant to brave the bitter cold and relatively more dangerous trails to be surrounded by the magnificent snow-capped mountains.

The trail is significantly less crowded during this season. You can easily get accommodations if you call ahead of time. Behold the beauty of the Manaslu Base Camp trek Nepal with all the advantages of the off-season revelations.

Thus, scheduling your trek during the fall (especially October) or spring (especially April) can ensure one of the best trekking experiences of a lifetime.

Which is the best time to trek Manaslu?

What is the best month to climb Manaslu?

Ans: March is the best month if you want to travel in Chill weather to the Manaslu Nepal trek. The weather is not very hot at a lower altitude and not very cold at a higher altitude. The climate is also cool you can experience your trek with the utmost thrill and adventure.

If you are looking for information regarding the routes of the Manaslu trek read Routes and Maps of the Trek chapter.  If you are wondering how to choose the best trek operator, find detailed information from this How to Choose the best Manaslu Trek Operator chapter.

If you want information about Manaslu trek ground transportation read the chapter Ground Transportation during. In other chapters of this Manaslu Trekking guide, we have explained in detail of  Internet and Telephone Facility in the Manaslu region, how and where to find the Trek Guides and Porters and how much dangerous and safe is Manaslu Trek.