Be a first to review

Although Worldwide Experience started in 2002, the story goes back much further than that, beginning with the Gardiner family in 1990. Adrian Gardiner, a prominent businessman in the coastal city of Port Elizabeth in South Africa, bought a farm of 1200 hectares as family weekend getaway. Upon researching the history of the farm, Adrian Gardiner soon realized that, despite the lack of game in the area at the time, the Eastern Cape used to be one of the richest wildlife areas in Africa in terms of biodiversity! In fact, the legendary big 5 were first encountered in the Eastern Cape. Wildlife historians refer to the Cape Buffalo, Cape Leopard, Cape Lion and Cape Hunting Dog (African Wild Dog) in their historical documents.

The endangered Black Rhino flourished in the Eastern Cape. However, due to hunting, over-farming and drought most of these species were eliminated during the 19th century. Adrian’s vision to restore the area to its former glory was born, and through much dedication started to materialize in 1992 with the birth of Shamwari Game Reserve. During the past twenty five years, 25, 000 ha of pristine and agricultural land was consolidated and rehabilitated. Remaining wild animal species were allowed to increase in numbers and species extinct to the region were reintroduced.

Today, Worldwide Experience is run by a small and passionate team who are themselves, conservationists, with team members having impressive conservation-related qualifications and experience in the field on game reserves and with student and volunteer projects. Our head office and operations office is in Port Elizabeth, South Africa. 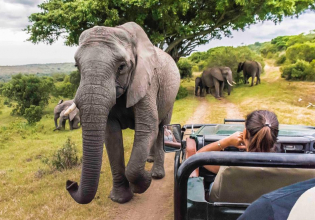